First off, you need Chrissy Teigen’s cookbook Cravings! She is naturally hilarious, she puts a spin on things that make you literally laugh out loud and you’re just thankful that she is the realest. Her wording makes you feel like it is okay to mess up, or change things out if you need too. Ideally, I want to “cook” through her book, now let’s not get crazy I won’t be making EVERY recipe, but I am going to try to make a few that speak to me. When I was looking through the book, I saw this recipe and thought “I have all of those things!!” which is hard to do with a lot of her recipes because I am as plain jane as it comes with food. If you know me, which some of you do, I love hashbrowns..they are my jam, my everything, so naturally my first recipe from her book has to be the Crispy Hashbrowns. 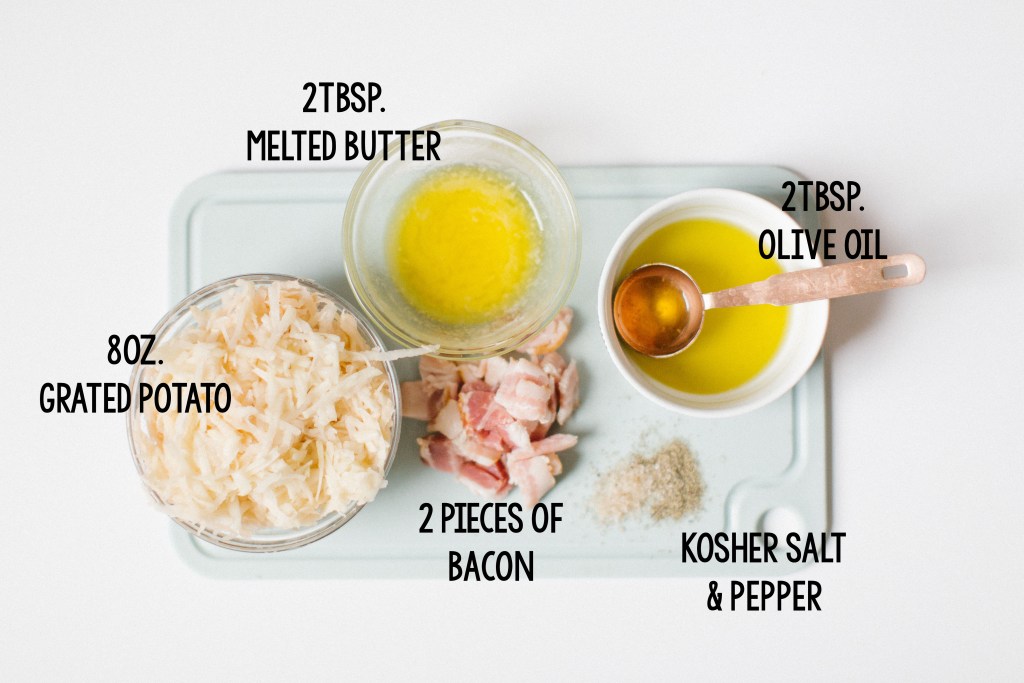 8 oz. of grated potato (you don’t need to weigh it out, I did for you, basically it is one large potato.)

2 pieces of bacon chopped up

Kosher salt & pepper (she gave an exact amount but I just sprinkled for preference…we like salt in this house.)

Take a non-stick or cast-iron pan and heat it to medium-high heat. (her cookbook says when you place your hand ABOVE the pan and you feel a strong wave of heat, it is ready. DO NOT TOUCH THE PAN!) Grate your potato, pat dry (only once or twice-don’t get too crazy) so there isn’t a ton of liquid, then mix in chopped up bacon. Throw in a dash of pepper and salt and you’re good to go. Throw the potato/bacon mixture into the pan. Mix the oil and butter with a little more salt and pepper and pour 3 tablespoons over the potato mixture-do not mix with the potato’s just pour it over. After 4-5 minutes flip the potatoes when they are golden brown, pour remaining butter/oil mixture all over potatoes and wait for them to crisp up. Then, Boom! You’re done!

Review: These hashbrowns were absolutely amazing, I added some chopped green onions as a finisher. They were the crispiest hashbrowns I have ever had (at home.) I am sure it has to do with alllll of the butter and oil. worth it.  I do not have a final picture because they did not photograph well. trust me.

What would I do differently: They were delicious, but they were a tad on the greasy side-next time I might consider cutting the oil down. Also, I used a smaller skillet so I want to use a larger skillet so that the hashbrowns are spread out more which might help with the grease factor.

I cannot wait to make these again for Matthew, and add a poached egg and some avocado on top. I am salivating just thinking about it! Let me know if you make it and what you think!

see me in your inbox