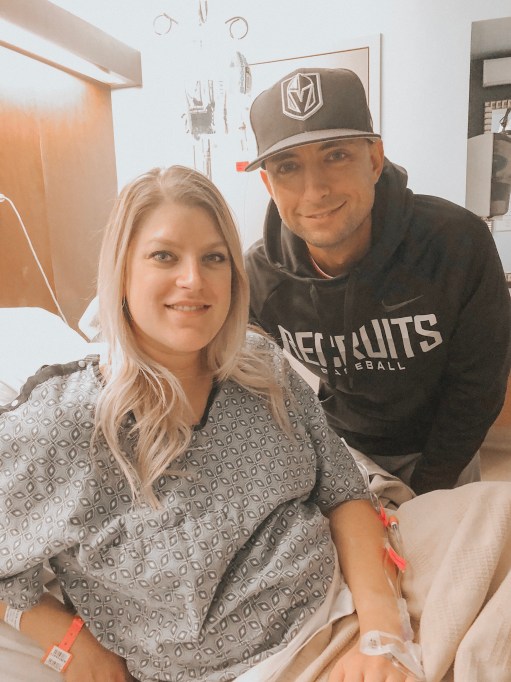 On July 5, 2018 we walked into Spring Valley Hospital at 10 pm full of excitement and nervousness of not knowing whats to come. After getting checked in they “checked me” and I was only 1 cm and 30% effaced, I had been 1 cm for 3 weeks now so I wasn’t surprised that much had not changed. At 11pm they gave me medicine to start the induction process, we were already 40 weeks and 5 days at this point so we were definitely ready to meet our little man.  During this time I was supposed to “rest,” and that definitely didn’t happen; my adrenaline was pumping and I couldn’t sleep knowing our lives were about to change forever.

At 3:30 am they came in to check me again, and see if I had progressed at all…I hadn’t. I had become “softer” but I was still at 1cm. The nurse could not give me the next dose of medicine because my contractions were coming on too frequently, she gave me some extra fluids via IV and had me drink a ton more water. My contractions slowed but I was still having too many within a 10 minute period to get the next dose. I was feeling discouraged as nothing had progressed, and we were just waiting on my body to react so we could continue inducing me.

At 6:10 am I was STILL at 1 cm, and he was in the -2 position, which means he was still high up and not ready to come. At 7 am, my doctor started pitocin, which strengthens and induces contractions. An hour later my doctor came to do her rounds, Matthew was out of the room grabbing breakfast and then my doctor decided to break my water, weirdest feeling ever! I texted him saying what happened during the brief 15 minutes he was gone and I don’t think he left again after that. At 9:20 they came in again and upped my pitocin, at this point contractions were getting real and I had to actively breathe through them. My nurses were amazing and at some point the pain was pretty strong but I wasn’t far enough along to get the epidural. They came in and gave me some pain medicine through my IV and I had some relief but more than anything it made me drowsy.

Finally, at 12:45 I heard the sweet words “are you ready for your epidural?” Throughout my pregnancy I was worried about the epidural because moving even a flinch can mess things up, but in that moment I knew I needed to pull through and not move a centimeter. The nurse had me practice not moving during a contraction and thankfully I could handle it, the epidural was done in minutes and I had two contractions during the process. At 1:30 pm my doctor checked me and I was almost at 7 cm, 80% effaced and at a “0” placement, which means everything was getting really close to happening. The nurses and doctors were a little worried because baby’s heart rate kept dipping during my contractions and I was bleeding a little more than they would have liked.

At 3:30 pm they checked and both myself and baby were doing great, but my contractions were becoming too spaced apart so they gave me another ½ dose of pitocin to hopefully keep things moving. Finally at 4:45 I was 9 cm and 90% effaced, and he was in a +1 position (he needs to be at a +3 position for delivery.) I noticed at this time that my left leg was completely numb but I could still feel my right side pretty well, move it/lift it/etc. Insert panic mode. I could feel my contractions and the pressure on my hip pretty strongly on my right side, but it was still bearable and I didn’t want to get more epidural if I was about to start pushing. At 5:30 I was “almost complete” and ready to start practice pushing to descend baby into the +3 position. This was so much harder than I could have ever anticipated. Pushing was so different than I ever thought. I pushed for a little awhile and then we rested for a little while because he just wasn’t moving down. The times get a little fuzzy at this point because I was in pain and in and out of it. Both of our families and friends were in the waiting room so they cycled in to say hello and check in on us, this helped the time pass by for another hour or two. Eventually the nurse walked in, checked me, and said “let’s start pushing.” Everyone but my mom and Matthew left and we got to business. My epidural still wasn’t strong and was starting to wear off in my left leg as well now. The anesthesiologist  came in and changed my epidural from a drip system to a button system, aka push the button when you’re in pain. I continued pushing but the pain and pressure on my hips were becoming unbearable, we pushed the button…nothing. I had been pushing for over an hour and I could feel every contraction, so the anesthesiologist came back in again and messed with some things and I finally got a little relief, but not much. Throughout this time baby had moved down a little but barely, and with each push he was just pushing more pressure on my hips.

They called in my doctor around midnight, and my doctor told me our options. She first wanted us to try pushing for a little longer, then we could try the vacuum method or two other things (at this moment things were fuzzy because I just wanted him out.) She mentioned c-section was an option, and at this point I was totally fine with it because I was exhausted and in so much pain. The anesthesiologist came back in one more time, because again I could feel everything, and she pushed something straight into my epidural and I was instantly numb waist down. We pushed and then tried to use the vacuum but little man just wouldn’t move down, she tried through 2 different contractions and it just popped off both times.

She looked at us and just said “you are stable, and baby is stable but I think we need to do a c-section.” Through teary eyes I agreed, my doctor fights having to do a c-section with everything so I knew if she was suggesting it, it was truly the last resort. Within minutes everyone was pulling on scrubs, counting equipment, and I was being pushed into an OR. I was calm, and honestly not anxious or worried about anything I was just so ready to see who this baby.

Within 10 minutes I was hearing the sweet cries of our little man. I cried the most love-filled tears when I laid my eyes on his squishy little face. 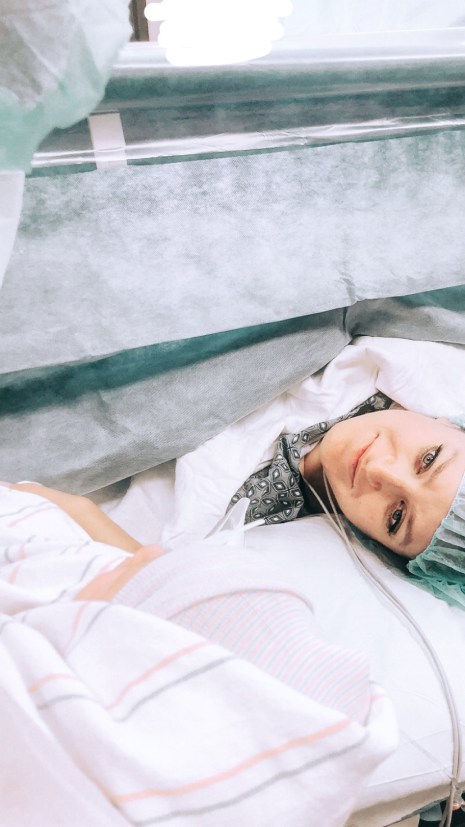 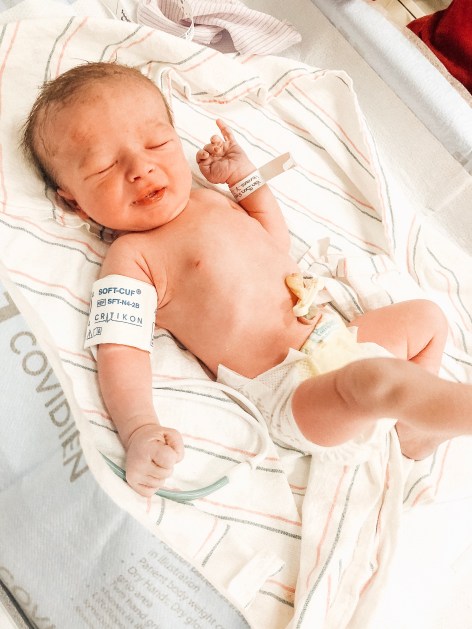 see me in your inbox